skip to main | skip to sidebar

I have been away for quite a long time. Remember the Trinidadian Sea God? Well, yes, he has been the sole owner of my thoughts and energy these days. A long distance relationship does that, especially one that is crippled with obstacles and half truths (who conveniently forgets to mention an on/off girl friend who is 6 months pregnant? A man, of course.) I went back to Trinidad in may, and I have fallen in love all over again; with him, with the island, with the mountains and the soothing sea. I left a part of me behind when I got on that flight back home. Four months since we first met, we settled on friendship. It is quite a story, and it is so wild, I had to pinch myself several times to see if I was still living in the real world, and not a bad tele novela. Amidst Baby mama drama, death threats, marriage talk, twins, and other eccentricities, I have decided to focus on different projects and start a new blog where I could write- not about my own life, shocker- but about issues that were dear to me, and were tied to HIV/Aids education and prevention. The topic is wide and encompasses sexuality, politics, foreign policy, relationships etc... and so there is always something new to discover. This little blog has been a source of solace so many nights, where I poured out my emotions into a new post. I thank all who have followed my raves and rantings, and hopefully, you will take a look at MY NEW BLOG.

I'm taking a break from Blogging, from Facebook, from the digital world...I need some time and space to figure out some things and start new endeavours. I'll miss this little spot, and reading comments but I'll be back in due time. Until then, you can contact me at: Blackvelveteen@live.ca, I'll still be reading all of your blogs ;-)
God Bless. 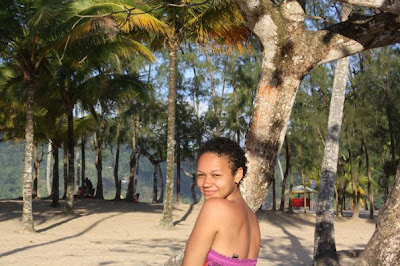 Maracas Beach, Trinidad and Tobago
It seems that one of the components of maintaining (or creating?) a long distance relationship is dirty talk. The gap between mental connection and physical closeness is made even more pronounced when you remember the times you were intimate with the other person. What is even more frustrating is that the distance, the 2508 miles or 4037 kilometers if you rather, did not put out the flame. Instead, the original sparks have progressed into a forest fire.
'Phone sex is the fun part!' assured a friend, who was previously in a long distance relationship 'you have to be very comfortable, you have to be able to laugh at each other.' Instantly, this piqued my curiosity and my creative juices began to flow; I decided to go on the Internet, and get some inspiration.
I found website after website that promised to have your 'man eating out the palm of your hand' for a fixed price. I was surprised that people would actually pay for something that can be found in any erotic book, or even on Sesame Street (lol).
But I digress.
Dirty talk, I reasoned, could not be much different than talking during sex, no?
Of course, you had to make it more lengthy and create a sort of plot, tell your partner how you wanted him, and what you would do to him if only you were in the same room.
When I was in my first serious relationship, I tried to make my ex boyfriend talk dirty in bed. The experiment was a total failure; He would say really elaborate romantic sentences. I told him that I knew he loved me, but in bed, I wanted him to be nasty and down right incorrigible.
I didn't want to hear about how 'our atoms entwined' or that he wants me to 'bear his seeds.'
His response; he thought that talking dirty was corny, and that it hindered his originality.
*Sigh*
Putting past (disappointing) experiences aside, I decided to start small; I sent him a text message on how I couldn't stop thinking about the time he did ***, and I did ***... When I got the hang of it, and had shed my initial discomfort, I got bolder with my text messages. While in class, I glanced innocently at my phone and saw his response to my previous text, I had to restrain myself from bursting into laughter.
"This boy is rude." (By the way, as I learned, in the Caribbeans, 'Rude' means sexual, and 'Rudeness' refers to the act of... )
Later on, he called me and said; 'You are so nasty!' We started to laugh, and I marveled at how 'talking dirty' is as sexual as it is silly. Some of our text messages bordered the ridicule; there were talks of the neighbors calling the cops, of body parts being broken... It was just silly.
We switched the subject to more mundane things; he told me about his day, asked about mine, we told each other how we couldn't wait until we saw each other again...
Then, he proceeded to tell me what he had in store for me.
Now...Dirty text messages are simple enough; you have the time and distance to think them through, before hitting the 'send' button.
Live Dirty talk is another ball game, one that I was not ready for. I proceeded to giggle, and laugh uncontrollably.
*Sigh*
This will demand some practice, on my part.
On the positive side; there are two girls in long distance relationships at work and we've talked about the limitations, the ways to keep close and the dead line which every budding relationship must acknowledge. This 'dead line' is the 'when' one of you will make the leap and move to a lover's country.
'If you have a plan, then you have a chance to make it. If it's a 'see you when I see you' then you can forget about it, it won't work.' I was advised.
We shall see.
Posted by Nana at 12:12 PM 0 comments 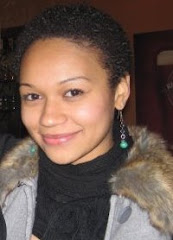